From a DJ to a slightly different star chef

A chef who discovered fire, and an international hotspot with an incomparable skyline. We got an inside view of René’s fast-paced lifestyle and his fiery MyWeekend. 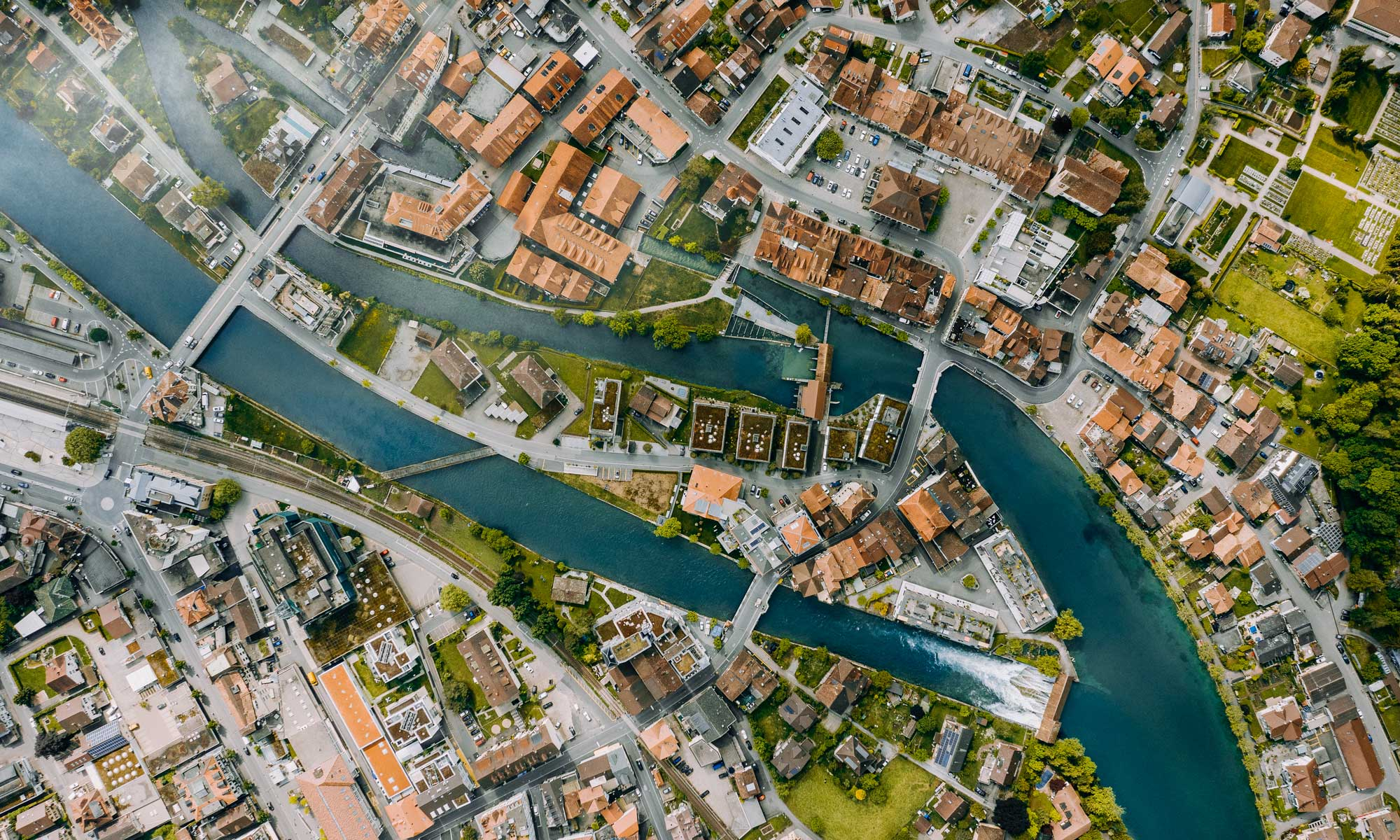 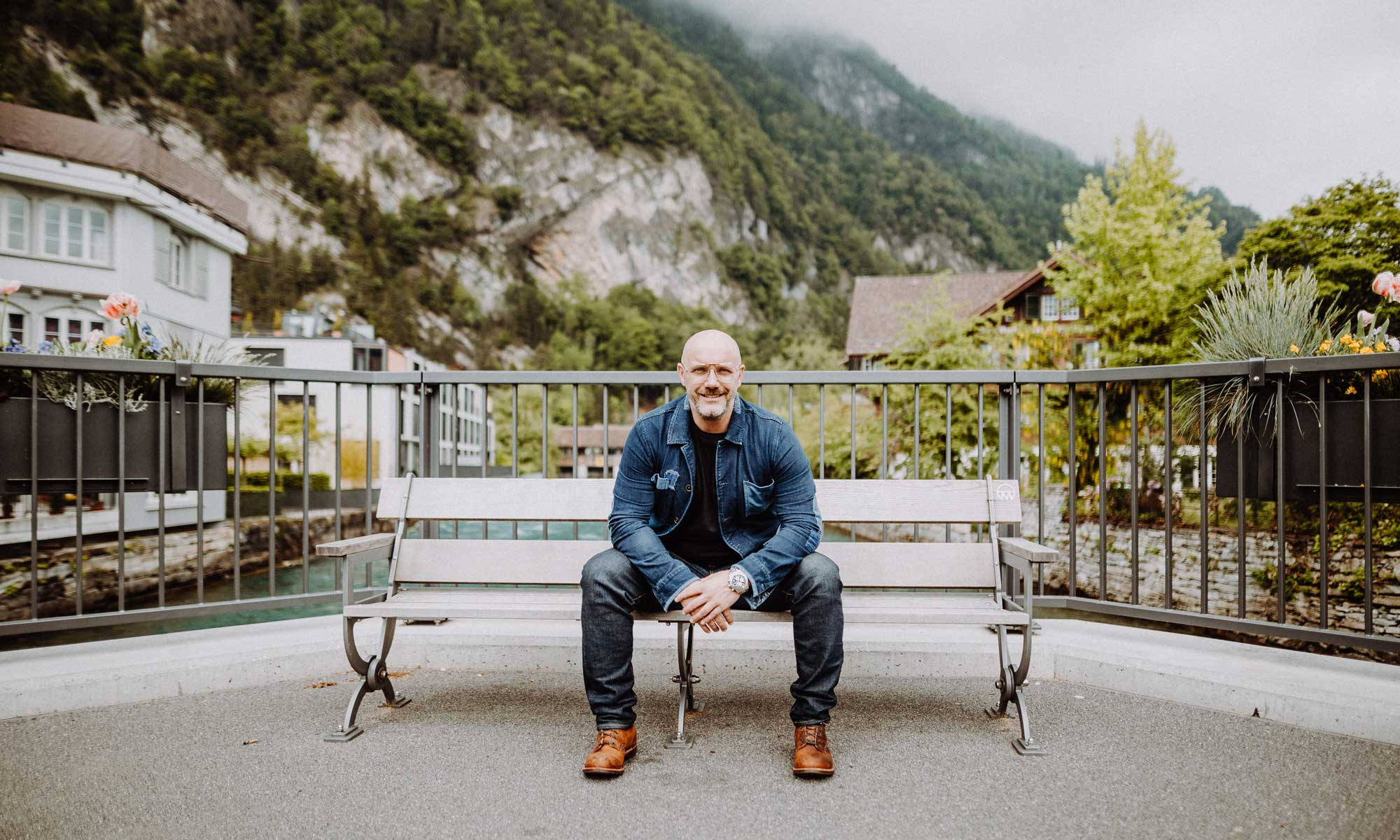 Full of energy; that’s René. No matter when a day ends, as soon as the sun appears on the horizon in the morning, René quickly gets out of bed and is ready for action. Even as a young boy he was full of power, but he did not yet know how he could channel this power. With great difficulty, René barely completed a chef apprenticeship. His passion for cooking had yet to be awakened.

We meet him in Interlaken, Switzerland’s tourist Mecca. As a young boy he roamed the city. International guests and tourism have always been the lifeblood of the region. When René was a teenager, there were first-class clubs, while in Zurich there were none. We stroll along the streets, past restaurants and pubs that used to be clubs in which he worked as a DJ. At the Kulturgarage, René’s favourite place in Interlaken, we drink a cup of coffee and spontaneously find out that there was once a Hertz station in this building.

René Schudel, 43, is a trained chef and is renowned for his TV show. He grew up near Interlaken, and nowadays he and his unorthodox culinary skills are known throughout the country.

René Schudel grew up right next to Interlaken in a village with 2,000 inhabitants called Wilderswil. The time he spent in school is not one of his best memories. Instead of sitting at his desk at school, he preferred to haunt the big sawmill with a friend from school. It was an Eldorado for the two youngsters, who practiced drifting for the first time there in a light blue VW bug. Transferring to a private school in Thun did not have the desired effect that his parents had hoped for. René only did what interested him, and that had little to do with school. As a young teenager in the 80s, he discovered electronic music. Finally, he had found something that was worth investing all his energy and money in. A career as a DJ was his goal from then on, and so he dove into the world of synthesizers, turntables and vinyl records. Although perceived as noise more than anything else by his milieu, he played his first loops and made a name for himself in Interlaken as a young DJ. In the evenings, he climbed over the gutters of his parental home like a ninja with vinyl records on his back to turn night into day in the clubs of Interlaken.

In the eyes of his parents, being a professional DJ and a rock star was not the solid basic education that they had imagined for their son. During an argument with his father, René spontaneously offered to train as a chef. To his surprise, his father, a respected village doctor, agreed, and so it was a done deal: René would become a chef! 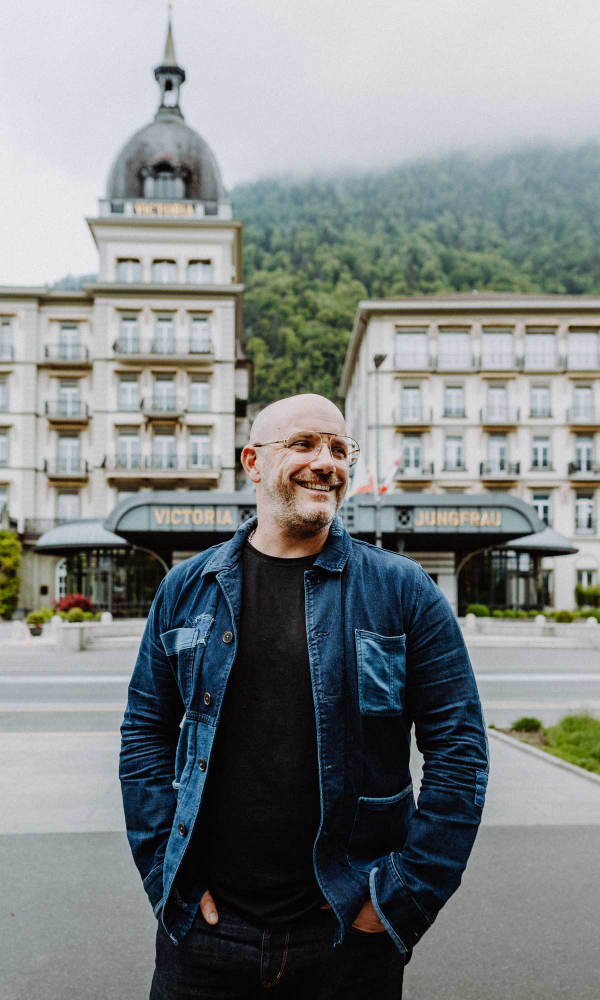 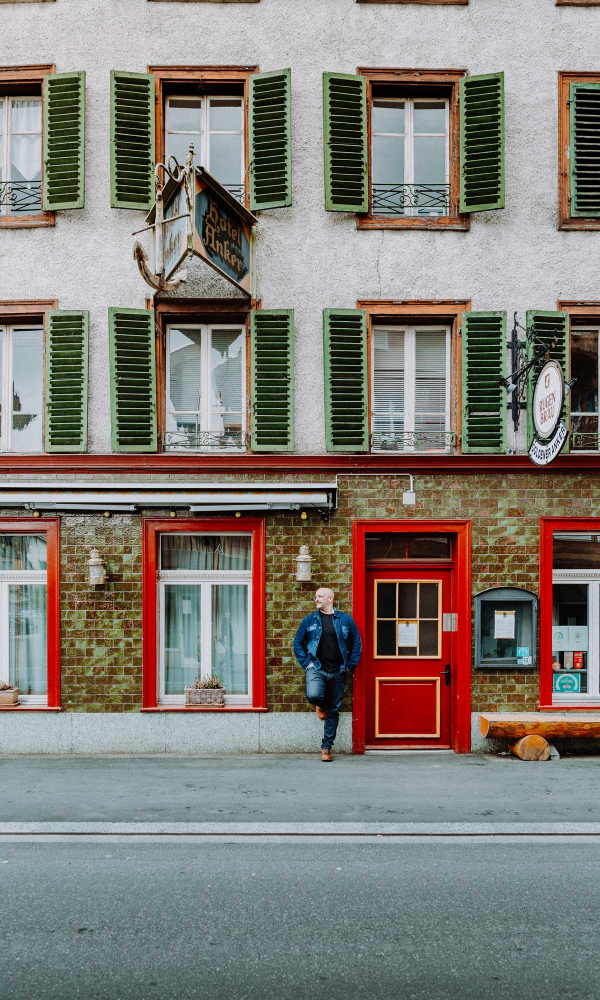 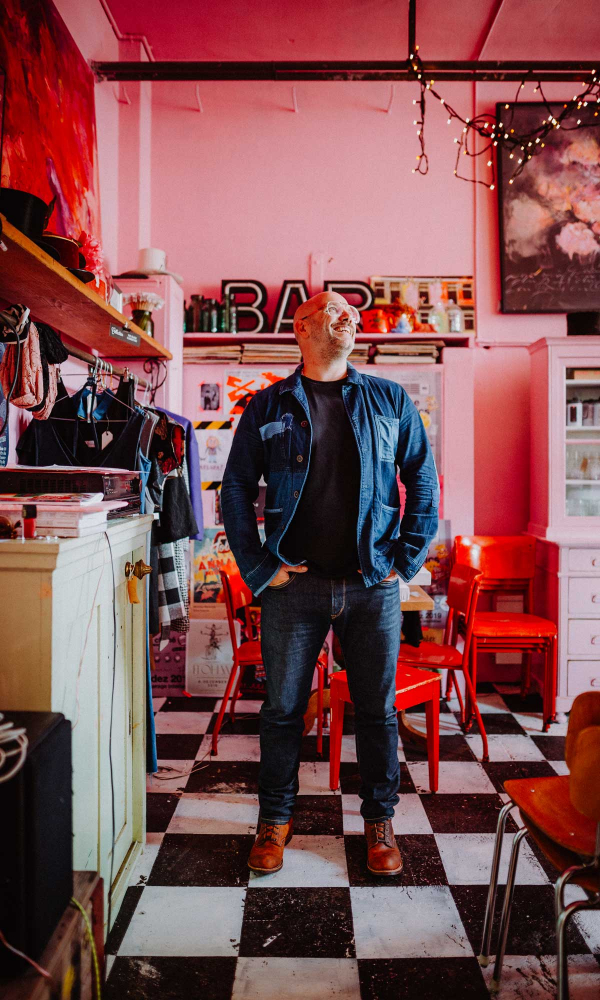 Thanks to vitamin B, René began his apprenticeship at the rather posh Victoria Jungfrau Grand Hotel & Spa, which offered chances and opportunities he did not appreciate at the time. His sole concern was not hurting himself with a knife while doing kitchen work, because otherwise he would not be able to play in the clubs anymore. In the 90s, a very exclusive cuisine was taught at the Victoria Jungfrau; it was a different league with unusual products such as lobster and wild salmon. Looking back, René owes a lot to Erwin Stocker, the "kitchen grenadier", from whom he has bought an entire collection of cookbooks. Cooking was a "mega experience" and he learned more than most other apprentices in the gastronomy sector back then.

Upon completion of his apprenticeship, which he was able to finish a week early thanks to untaken holiday leave, he left the Bernese Oberland in his first car. His goal was the party Mecca Ibiza. René wanted to devote himself to electronic music and his DJ artistry there. He worked an entire summer as an animator and a DJ, and he partied in old greenhouses with over 10,000 party-goers until early in the morning. "All hell broke loose!", says René glowingly.

Occasionally René cooked for his DJ friends and to his surprise he received feedback that was decisive for his future:

"You cook better than you make music".

That was new for René. To just cook without this whole farce was liberating for him, says René. At the end of the season in September, the "lost son" stood empty-handed in front of his parent’s home again. Party life takes its toll on you, and it was clear to him that it was time for something new. 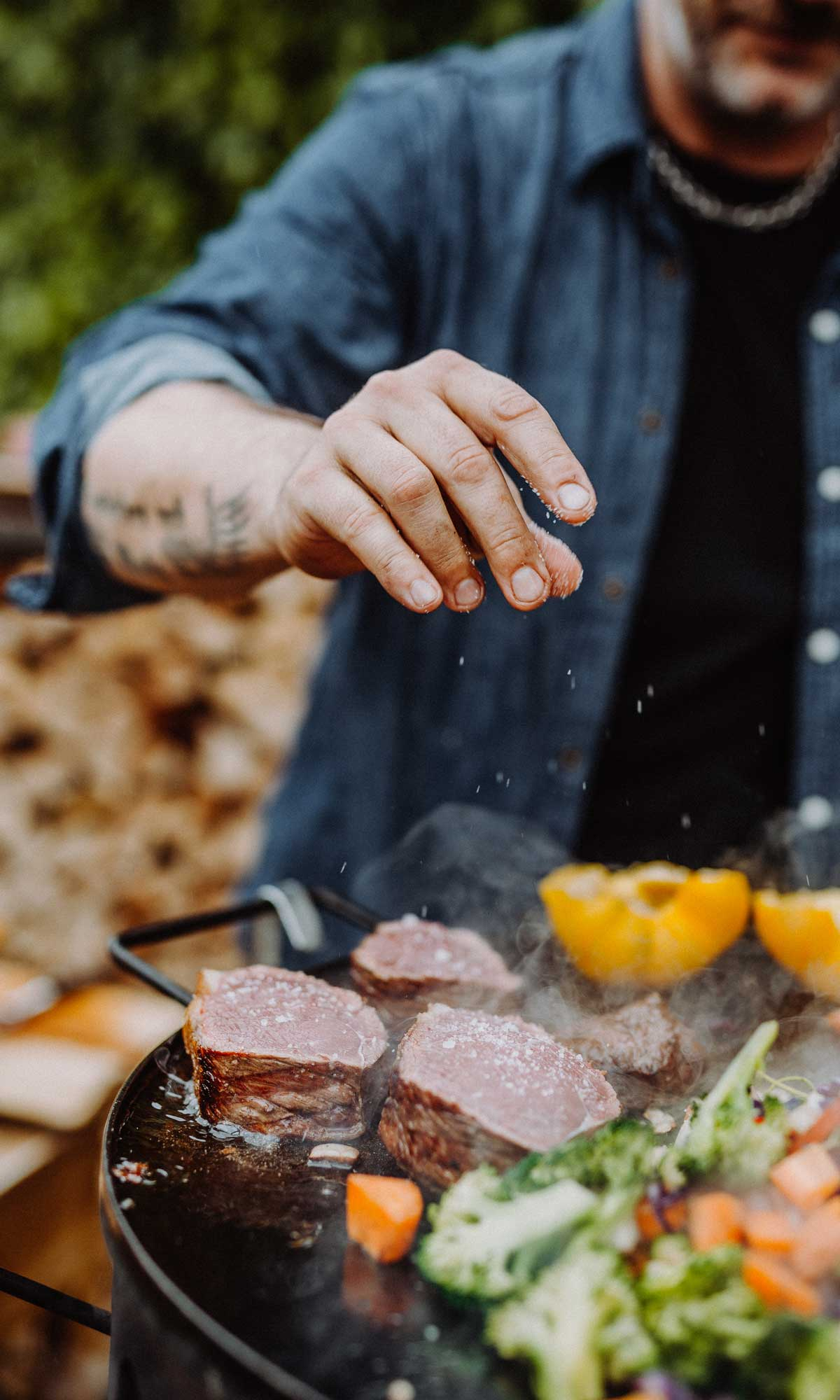 However, René’s connections from Ibiza paid off. He was asked to DJ at a wedding at the Designhotel Eden in Arosa. The hotel, and especially the way the owners ran it, fascinated René. It was a completely new kind of gastronomy: Suddenly the hotelier stood in the kitchen and his wife looked after the guests. The outdated customs and practices of gastronomy, as René puts it, were done away with. The white general at the stove became a rock star. The well-thought-out design of the stylish hotel, the fresh way of meeting the guest at eye level, the joy of world cuisine – all that was new for René. The high regard the guests had for the chef and their interest in his way of cooking, in particular, were the reason why René’s passion for cooking flared up and he accepted a job as head chef on the spot. From then on René rocked the kitchen.

After five years in Arosa, he moved to Zurich. Thanks to top chef Beat Caduff from the Grisons, he discovered his love for products. From then on tomatoes were no longer only tomatoes. Hitherto they were only there to be processed according to the rules of gastronomy. "Suddenly cooking was great fun", explains René. From then on music was unimportant and his new mantra was: "Cook, cook, cook". René finally expressed this new passion with the opening his first restaurant. The entrance led straight through the kitchen, the tables were covered with stylish tableware and water was served open. What is commonplace now in the gastronomy sector was very new back then.

When René describes his passion for music and cooking, a connection is found: Both touch people and both should speak for themselves. When cooking, this happens when one changes the original product as little as possible. From then on that was his credo, and he launched his first cooking show in the year 2000. In more than 123 episodes of Funky Kitchen Club, René cooks and eats his way halfway around the world. As always, he moved full speed ahead, and he opened two more restaurants in Interlaken as well.

Eating together is always associated with fire for René, and he gives us a short history lesson: Fire is the element that makes a human a human. Without fire, people ate meat raw and roamed restlessly through the wilderness in search of food. With the discovery of fire, people developed social behaviour. From then on people sat together at the fire, cooked over it and shared food.

With little equipment and materials, cooking directly over a fire became René’s favorite way to prepare meals for guests. This rather rudimentary style of cooking gives the meal the special roasted aroma that René likes so much. While he assembles his grill in front of us, he explains how different types of wood bring out the flavours of the products: The high-energy wood of the olive tree is incredible for lamb, applewood is great for pork and cherry is fantastic for poultry and duck. Cooking over a fire is challenging because you cannot change the temperature immediately like you can with a stove. Grilling meat and vegetables must be well thought out, and right away René begins to ponder the vegetables: "Some vegetables are sweeter, others are savoury and still others are delicate. When grilling, it is the vegetables and not the meat that bestow the sex appeal". René’s view of food and the joy it gives him is very contagious.

Since cooking over a fire in a restaurant is rather difficult from an economic point of view, René will cook for guests at a new pop-up restaurant in Interlaken. He does not need much for that: a big steel plate and fire below it. Since there were no satisfactory grills in the market place, a few years ago René decided to build his own grill. Together with an Argentinian welder he modified plough discs in Spain. That is the best material and it is real "heavy metal", says René, because it must be able to withstand the heat. 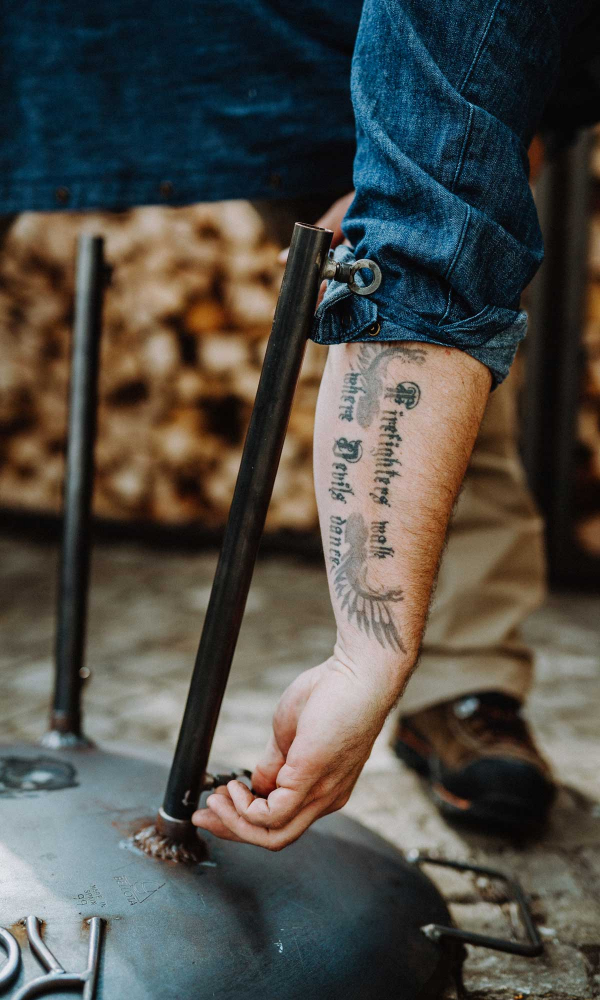 Hitherto, wherever René has cooked, he has done another job as well: He is an ardent fireman. This is illustrated by the tattoo on his forearm with the inscription: "Firefighters walk where the Devil dances". Even as a young man he put out fire – in his home village, in Arosa, in Zurich and for the past 20 years in Interlaken. That his involvement has nothing to do with his fascination with fire becomes quickly clear as René continues to explain. Above all, working on a team is close to his heart. A music society or football club was never his thing. He wanted to be where it comes down to him, where – in René’s words – "heavy stuff" is concerned. Quickly forming a team, providing temporary assistance and leading the operation – these challenges motivate René. With a broad grin, he reveals to us that in addition to team experience there is something else: "When you are the chef for the fire brigade, you have access to the best producers, because farmers, butchers and bakers – they are all members of the fire brigade. That is my service club". 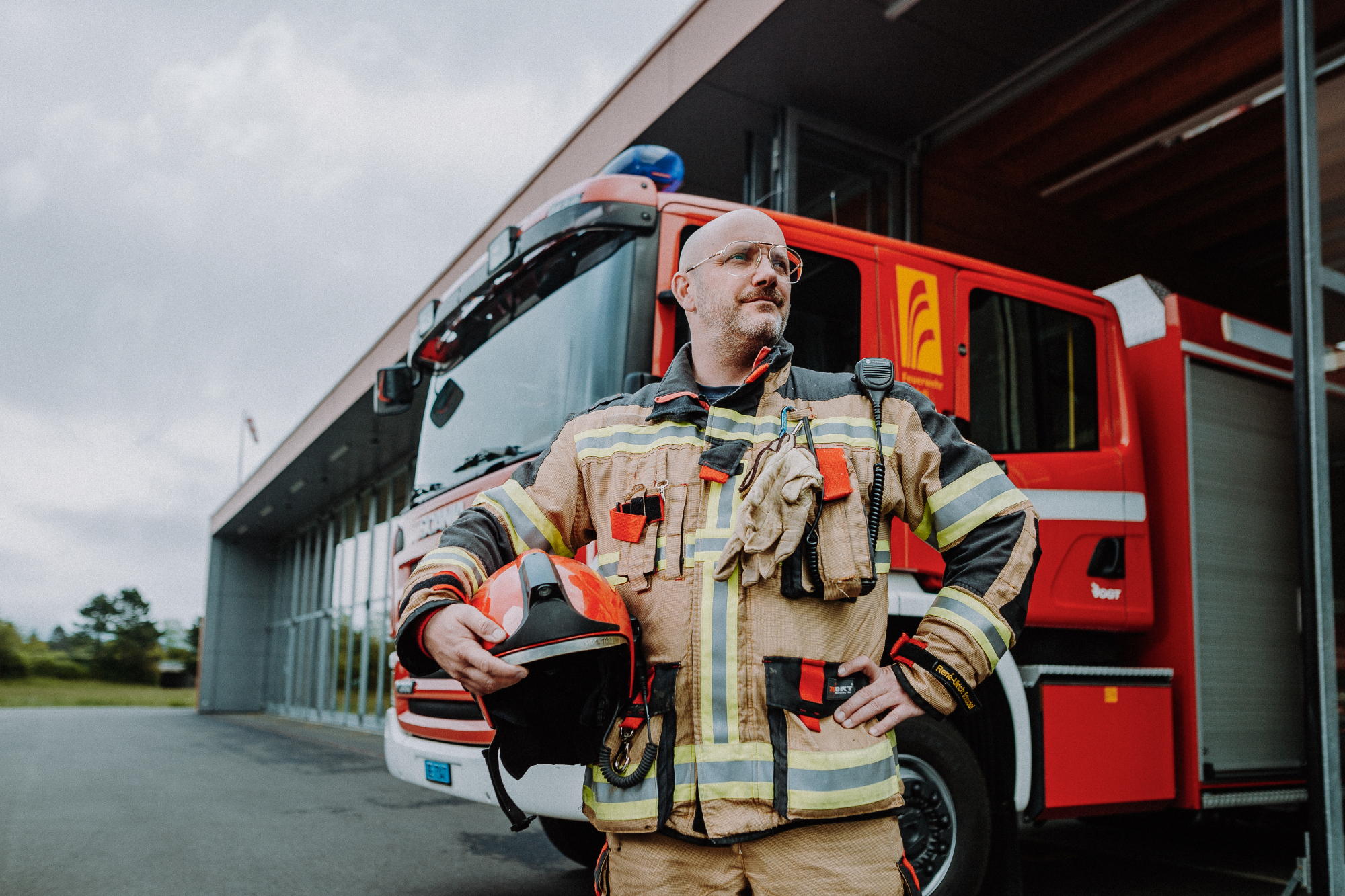 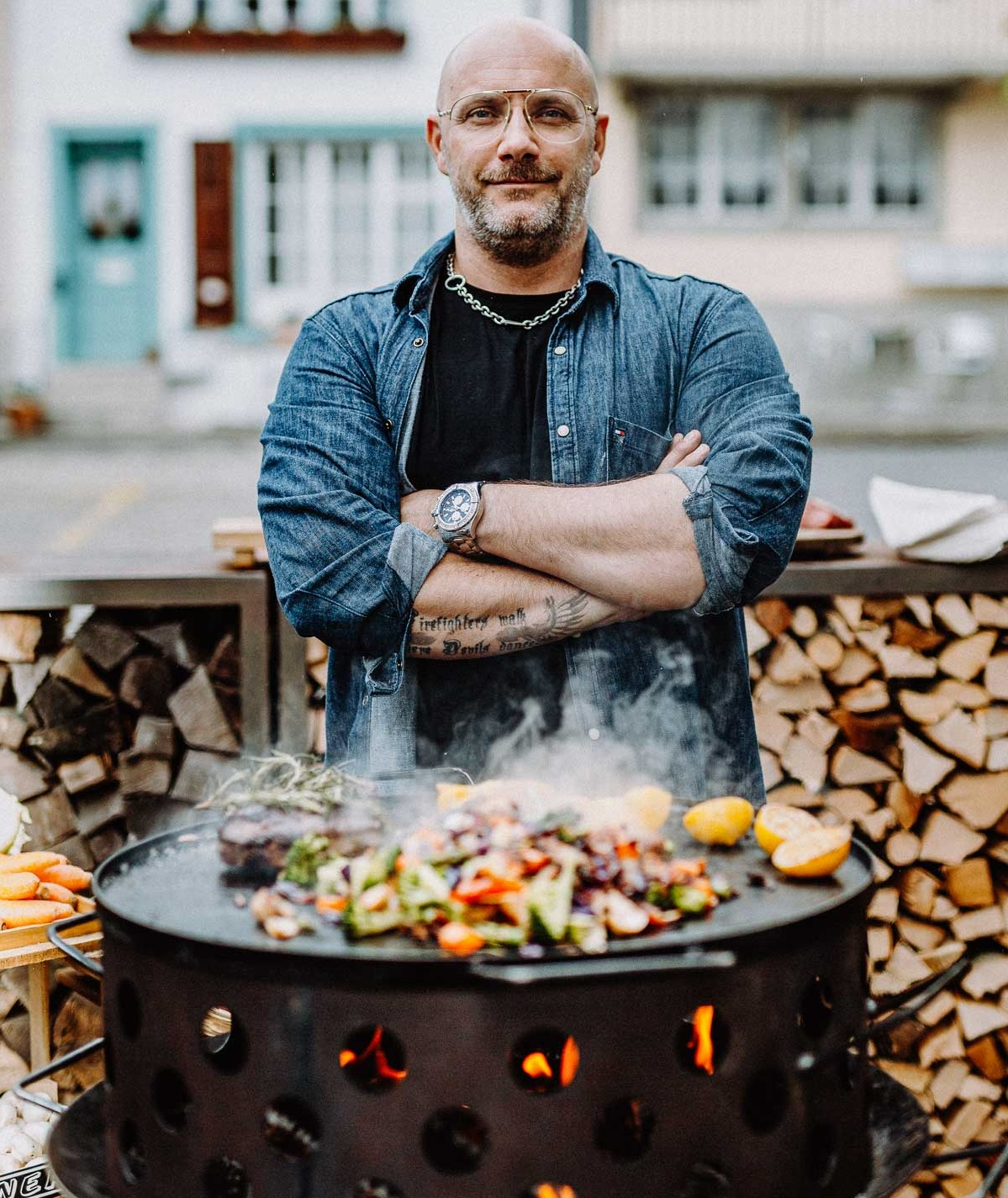 Greetings from the kitchen

René would like to stay in Interlaken, and for one reason: because it is not better anywhere else. The gastronomy is not comparable to that of Zurich or New York, but there is no other place where the quality of life is so good. He would only exchange the view of the Eiger, Mönch and Jungfrau for the skyline of New York, if at all. He would still choose to enjoy the pure beauty of his home on his perfect MyWeekend. That he remains here at home and is satisfied is also strongly related to the fact that he travels a lot. When he is not cooking for tourists in Interlaken, he becomes a tourist himself – or he travels as a chef to cultural hotspots around world. With so much travelling, not much can be allowed to go wrong, so René does not take any risks when choosing his mobility partner. With Hertz he always accomplishes his goals, and he can concentrate on collaborative gatherings and enjoy his love of food, whether it be sharing a round of tapas in Spain, filming a new episode of a TV cooking show with his cameraman in Norway or cooking over a fire with a good friend at 3,600 metres in an SAC hut. The fuel is nowhere near used up, and so René will probably light a fire in many more places.

Nestled between Lake Thun and Lake Brienz and surrounded by an impressive mountain backdrop, Interlaken is the perfect base for numerous activities. Whether you’re looking for active relaxation or adrenaline-charged adventure activities, sports and adventure plus plenty of enjoyment, sun, nature and fantastic panoramic vistas await you in Interlaken. 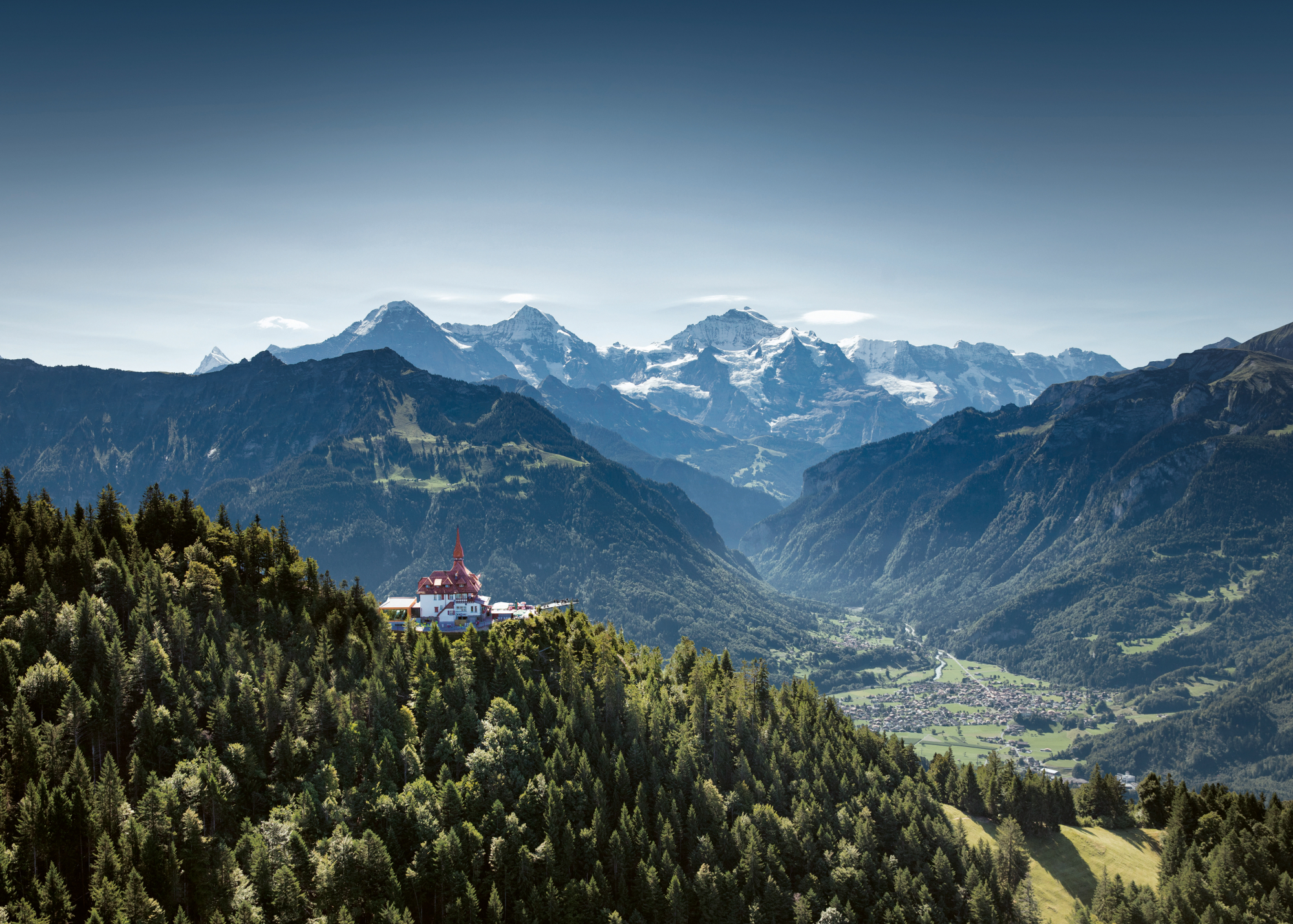 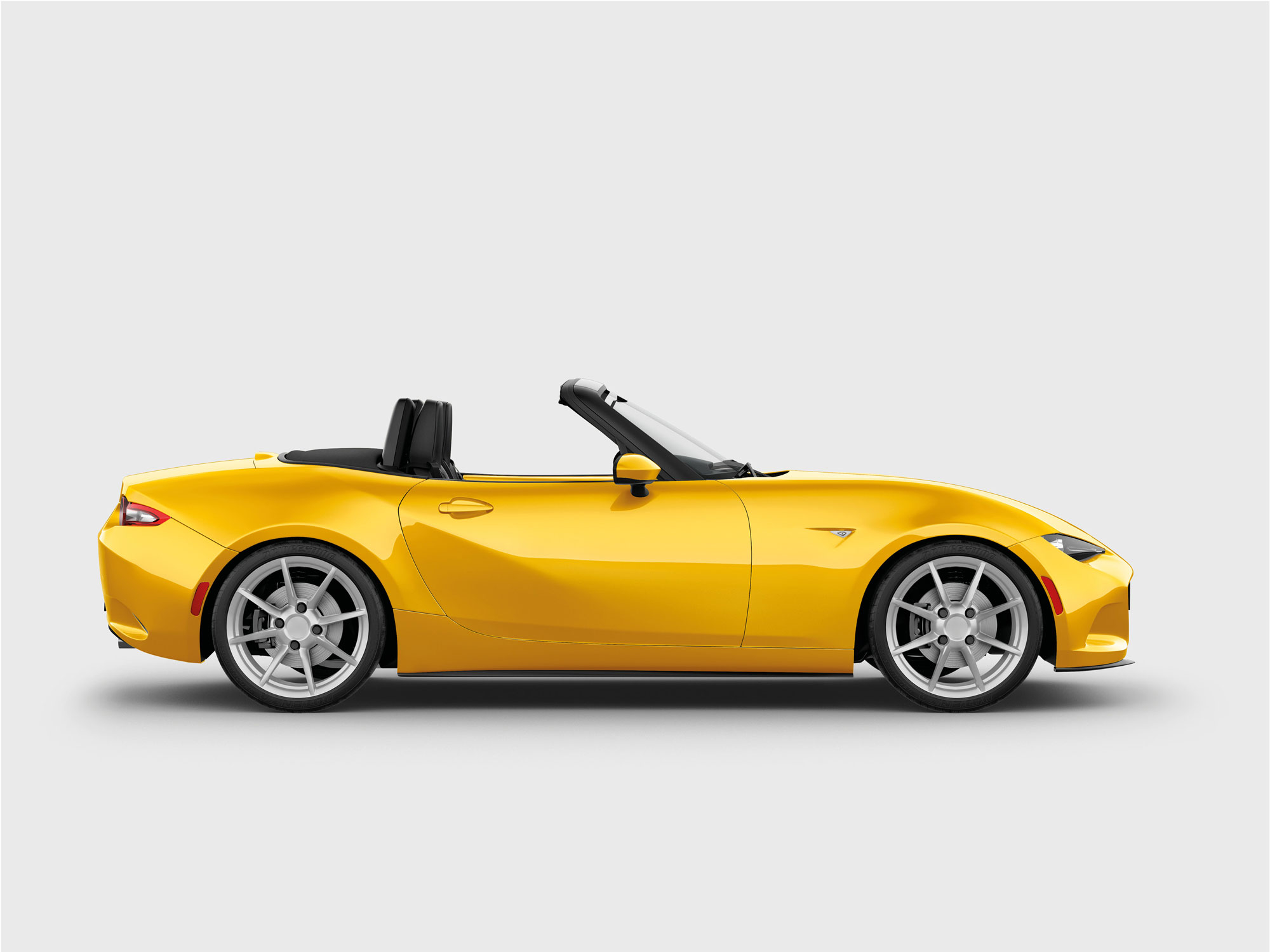 10% off your weekend with Hertz 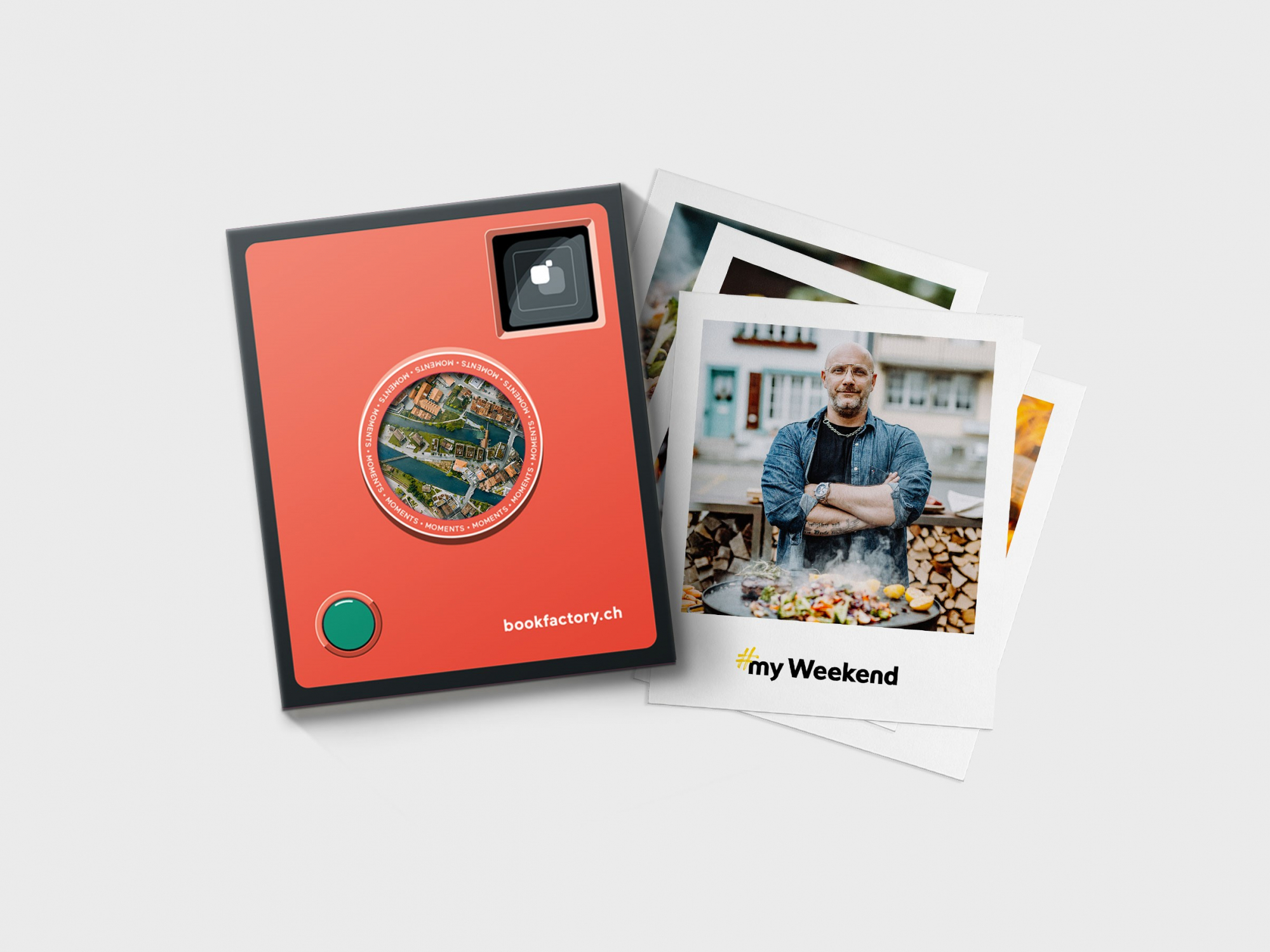